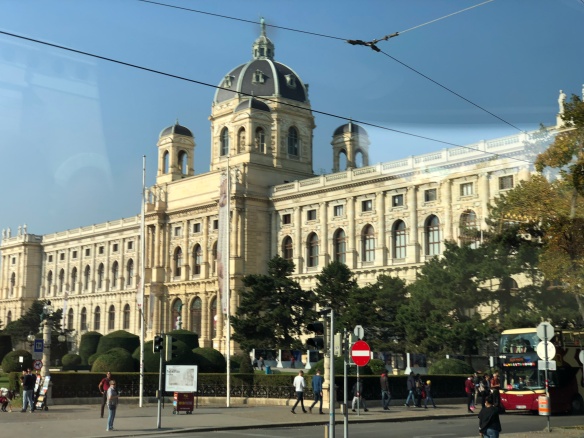 In Vienna they appreciate the finer things of life and have many statues, fountains, and buildings with grand architecture. We were supposed to tour Vienna on a bus. For the afternoon we have “at leisure time.” I hoped this didn’t mean walking around a large city in a foreign country without knowing where you are, unable to speak the language, and with no guide. If I wanted to wander around by myself, I would not have signed up for a tour.

Much to my relief, my fears were unfounded. As it turned out, the tour was okay, more or less. The tour guide was one of the best we have had. She said she was a ballerina at one time, and she knew a lot about music as well as a lot about Vienna. We drove around on a bus and looking at historic buildings. Then we got off the bus and walked to “City Center,” which I suppose is the Times Square or Piccadilly Circus of Vienna. The guide walked slow enough getting there, but on the way back she shifted gears and took off. *sigh* Nothing new.

We were supposed to look around on our own for a while and meet the  guide back at a big clock. I hobbled along with my cane, doing the best I could on cobblestone streets. Mo had quit helping me by now. I was going to tour the old church, but it was a mob scene, so I decided to skip it and look around the souvenir shops. Then I found a bench and sat down and waited. Not much more I could do by myself.

I think the company tour directors may finally “get it” that old people cannot walk fast. It seems that a company that specifically markets to old people and senior organizations would know this. I am not walking slow on purpose. My knees and my back hurt and I’m afraid of falling down and being seriously injured. I can only do what I can do. The amount of walking was the low point of the entire trip for me. 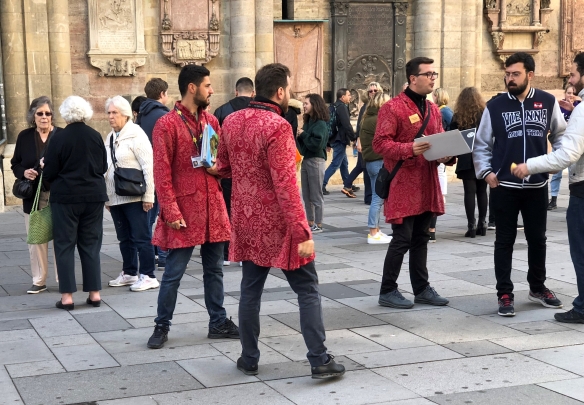 Mo was fixated on getting a converter plug to replace the one he shorted out, but didn’t find one in a tourist area, of course, and wasted the entire time looking. After we got back to the boat, he decided to get a taxi and go back to town. He paid I don’t know how much to get the taxi to take him to an electronics store where he could buy a converter, even though he could share mine and didn’t need it. Then he went to the souvenir shop and bought a sweatshirt exactly like the one I bought earlier. While he was gone, I took a nap as I was worn out again.

Tonight we got the massively “good” news that the water was too low to move the boat at night, so we would have to sail tomorrow afternoon instead of having time at leisure. I didn’t really care whether I had time at leisure or not. The Captain said they were going to drain the pool to lose some weight. What next? Will they throw off all the luggage and if that doesn’t work ask for volunteers to jump? (Okay, okay, an old joke. Sorry about that.)

We got more “good news” that not enough people had signed up to the Hungarian Horse Farm optional trip and it was cancelled. It is probably because they want to move the boat during the time we were to go to the show. I am beginning to suspect everything is a ploy.

A small string orchestra entertained on the boat after dinner and that was nice. Most people liked the food the boat served. I called it banquet food. It was course after course, salad, soup, appetizer, main course, (a small portion of something with gravy drizzled on the plate and a garnish on top) and dessert. Every meal except breakfast was served with wine. I later found out the chefs were Russian. I thought it did not seem like German food, and it certainly was not American. 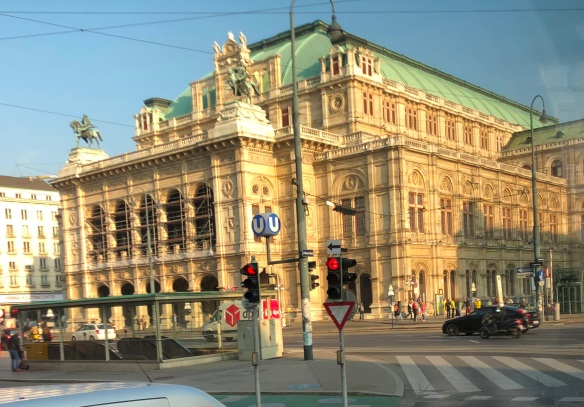 Today we visited Melk Abby. It is an active Benedictine Monastery, but the monks don’t come out for tourists, only for work and prayer, so we didn’t see them. We saw a big room that used to be a dining room and a huge library that looked like it was from a Harry Potter movie. Unfortunately, we were not permitted to make pictures inside.

We also toured wine country and saw the ancient village of Durnstein. It was interesting as there were ruins of an old castle as well as a small village with narrow, cobblestone streets and little shops. Unfortunately, As soon as we got off the bus, the local tour guide took off like a gazelle and I had no idea where he went.

I finally caught up and I spoke with him about slowing down. After that, he would stop once in a while for people to catch up. I came closer to falling down than at any other time on the entire trip when Morris cut in front of me and I tripped over his foot. I still don’t know how I managed to catch myself.

We walked up Main Street and down a valley into a courtyard in front of a pretty old baroque church. The steeple was painted blue and white, blue for the Virgin Mary and white for heavenly clouds, per the local guide. It is supposed to be the only blue and white steeple in Austria. 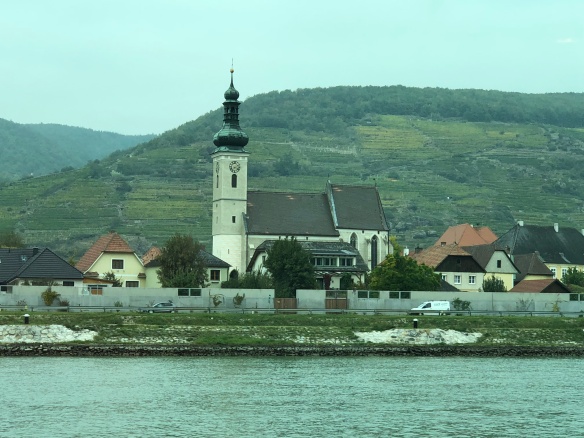 Next, the tour herd went up a steep alley with crooked cobblestones and large terraced steps. For the first time I balked and refused to go. The guide said they were coming back to the same area in 45 minutes, so why hurt myself? 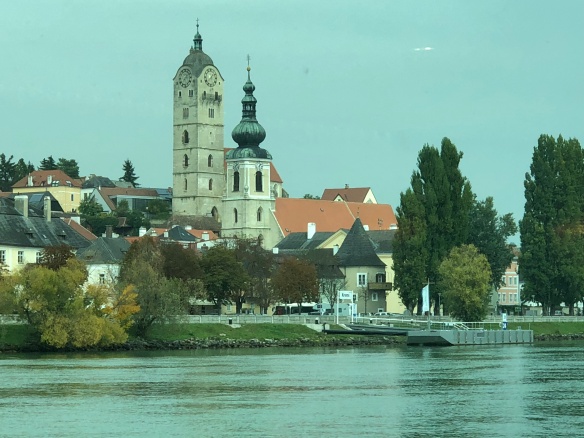 Eventually, they all came back and we went into a courtyard then into a wine “cellar”. I always thought “cellars” were below ground level, but this one was up a few steps. One good thing about these historic old places is most of them have installed a modern convenience called a “banister.”

The cellar was set up with long tables like a beer hall except with wine glasses. A local resident gave a talk about wines produced by his family, mostly white but they also produced red wine. Then, the good part, we were given a taste.

Wine #1 was apple smelling and had a peppery after taste. It burned and I thought it must have a high percentage of alcohol.

Wine #2 was also white and supposedly had an apricot taste.

Wine #3 was red. It was the smoothest wine I’ve ever tasted, no burn or after taste.

The red wine supposedly had been hard to develop and hard to grow as most ground was devoted to the more popular white wines of the vicinity. The grape terraces were on hillsides as well as on flat land and were supposedly four times as hard to harvest on the terraced land as it must be done by hand.

That evening we went to an optional orchestra concert at a concert hall in Vienna. I chose this because it was a “sit down” event; however, it turned out to be more beautiful that I could have imagined. It was one of the best things we did on the entire trip. 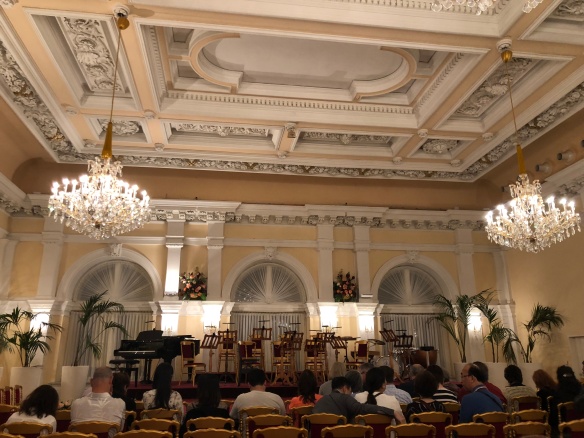 The orchestra played classical music, mostly Strauss, but some Mozart and other composers. It was sort of a mix of opera singers, ballet and well-known classical music. I couldn’t believe I was at a concert in Vienna, Austria, the place where Strauss once directed his orchestra. This was the one and only time we heard the Blue Danube Waltz played on the entire Blue Danube trip. 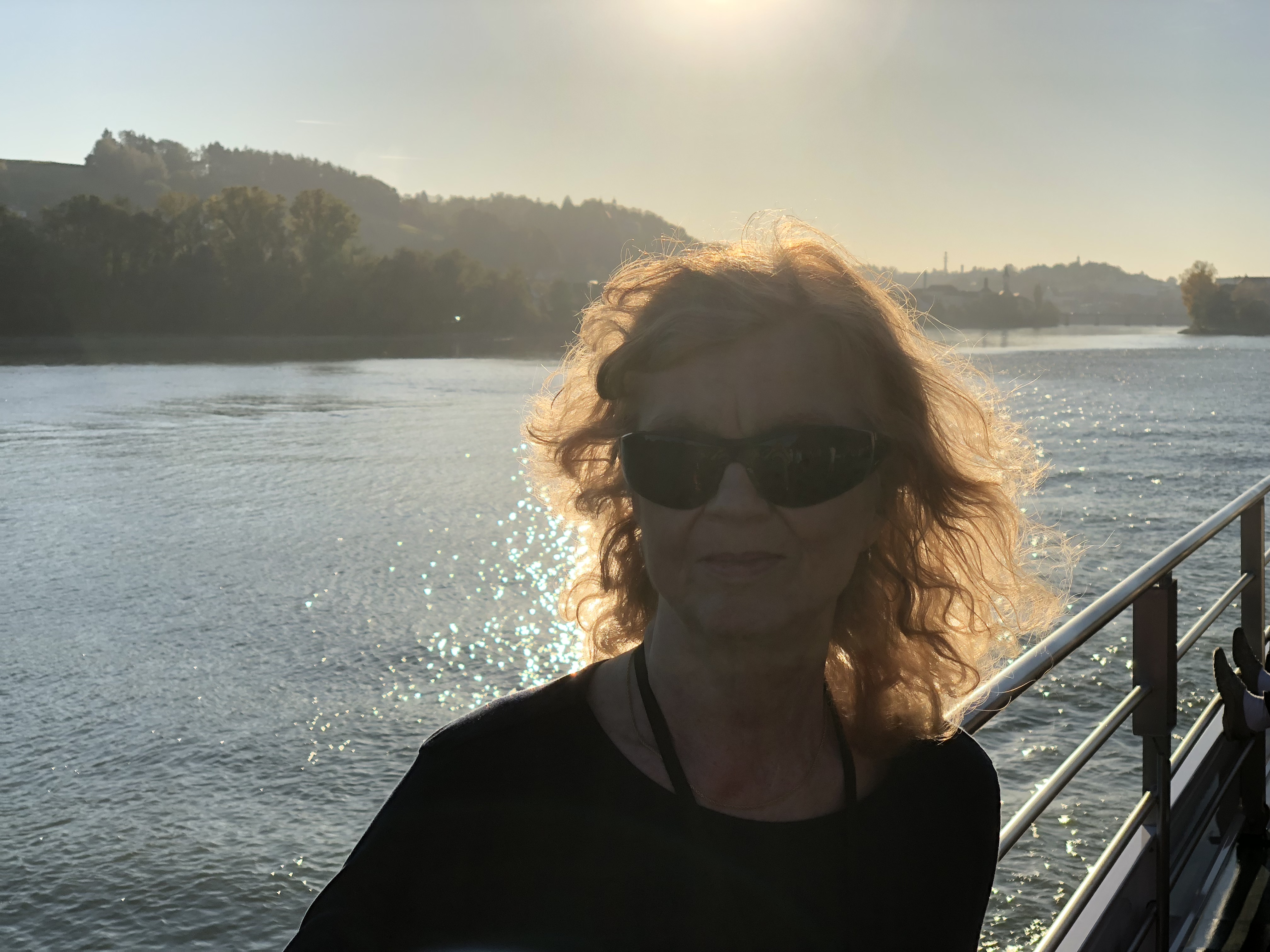 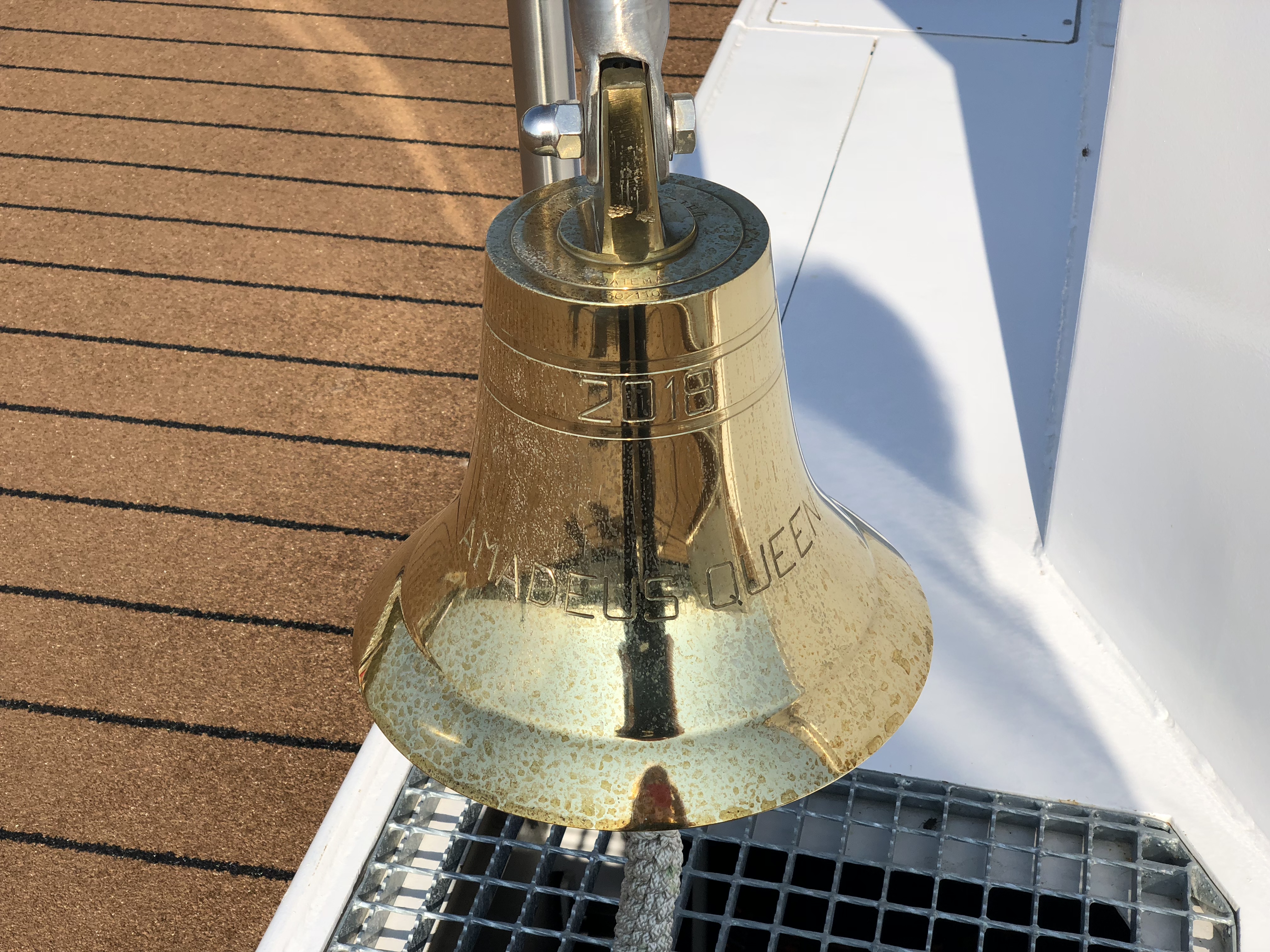